Lovingston is a ‘census-designated place’ located in Nelson County, Virginia, just southeast of Charlottesville and Albemarle County. It currently serves as the county seat for Nelson County and has a population of less than 600 people. Located on Route 29 South out of Charlottesville, Lovingston is the geographic center of the Commonwealth of Virginia and is just over 100 miles from Richmond.

The area of Lovingston was named for the Lovings, a prominent family who settled in the area in the early 1800s. The town was formed in 1807 when the 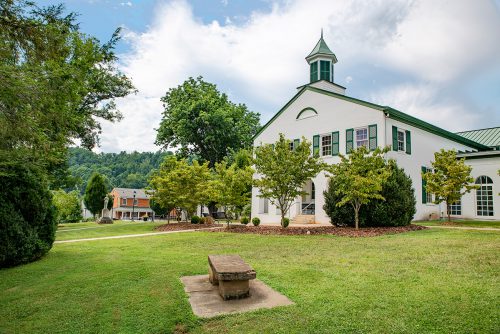 Loving family gave 30 acres of land to create it. The courthouse became the center of the town and was the first building built after the town was created. Lovingston was de-incorporated in 1938.

After the courthouse was built in 1809, the rest of the town was built around it in a grid-like pattern. The town was designed by George W. Varnum, a merchant and architect from the area. The courthouse served as a place for people to come and gather weekly from across the county. Around the courthouse, other buildings went up one by one, including a law office, taverns and hotels, and even a jail.

In 1969, Hurricane Camille hit and devastated parts of Nelson County and Lovingston served as a rescue area for all those affected by the storm. In total, 153 Nelson County lives were lost during the storm and a monument stands in courthouse square to remember them.

In 2005, over 130 buildings in Lovingston were recognized by the Virginia Landmarks Register and National Register for Historic Places.

The building best known as Kilmartin’s Pharmacy was originally built in the early 1800s and served as an inn for travelers. During the Civil War, it was used as a hospital for Confederate Soldiers. In the 1930s, the bottom was restored and used as a retail space and ultimately became the pharmacy. It was a place for gathering and remained open until 1980. The building still stands in Lovingston and is worth a visit.

Bright Hopes Baptist Church still stands and overlooks Lovingston. It was built by the American Missionary Association after the Civil War to serve freed slaves in the area.

Nelson Hall once held the only theater in Nelson County. It still stands today, but has been used as a movie theater, performance hall and even a church over the years.

Mountain Cove Winery and Lovingston Winery are both located in Lovingston and worth the visit. Virginia Distillery Company has its home in Lovingston and makes Whisky using the water straight from the Blue Ridge Mountains. Wood Ridge Farm Brewery makes its beer from its own, farm-grown ingredients and prides itself on being ‘legitimately local’.

Over 29,000 acres of land makes up Fortune’s Cove Preserve, located in Lovingston. A challenging hike ends with gorgeous views of the Blue Ridge Mountains. The unique landscape allows for ‘unusual combinations of plants’ species to survive here. It’s also home to a variety of wildlife.

Today, Lovingston is part of the Nelson County Public School system. It’s layout still remains similar to the original grid it once was.

There are plenty of wonderful wineries, cideries, distilleries and breweries within driving distance of Lovingston that provide fun for everyone. Lovingston is just a quick drive down Route 29 and is an easy commute to either Charlottesville or Lynchburg.

Lovingston’s historic charm and rural setting make it a great place to live.