Located just 19 miles south of Charlottesville, the town of Scottsville lies between both Albemarle and Fluvanna counties and is home to around 600 people. Once a large port on the James River, Scottsville has a growing downtown, family-friendly parks, plenty of history and small-town charm.

Scottsville was originally named Scott’s Landing after a prominent family that lived in the area. In 1744, Albemarle County needed a site for its new courthouse. Scott’s Landing was originally built around Dr. John Scott’s 15 acres near the James River. Edward Scott’s house was used as a courthouse until one was built. The town of Scottsville was incorporated in 1818.

Initially, Scottsville was a river town used as a tobacco inspection station with a ferry. The town grew rapidly once the Kanawha Canal was completed in 1840. The canal ran parallel with the James River from Richmond and Scottsville became the largest port on this route. The canal was meant to reach all the way to the Ohio River, but the outbreak of the Civil War stopped construction and railroads became the main source of travel.

During the Civil War, General Custer and General Phil Sheridan marched through Scottsville on their way to Appomattox. The town also gained a stop on the C&O Railroad that helped to supplement the travel over the James River.

Since the incorporation of Scottsville, there has been over 20 floods in the region. In the 1980s, a levee was built to protect the area from future flooding. 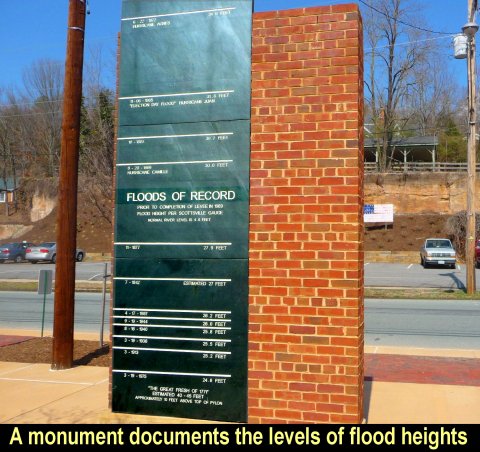 Scottsville’s Historic District includes over 150 buildings in the region including commercial, religious, residential and factories. It was added to the 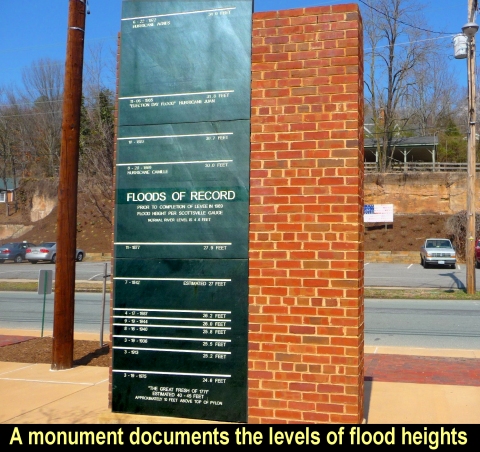 National Register of Historic Places in 1976.

The Scottsville Museum has exhibits that tell the story of Scottsville history and the important role the town played along the James River. The museum is inside the former Disciples of Christ Church which was built in the mid-1800s.

Scottsville’s Confederate War Memorial Monument and Cemetery honor the soldiers who died during the Civil War who came from the Scottsville area. The obelisk monument was dedicated in 2002 and is a Civil War Trails site.

The James River provides plenty of fun for residents and tourists alike. Horseshoe Flats campground boasts tent and RV sites, and is the perfect place to canoe, swim, tube, fish and picnic.

Just five minutes outside of Scottsville, Hatton Ferry still runs throughout the year. Hatton Ferry is the only poled ferry still operating in the United States. People can ride the ferry across the James just like settlers did more than 100 years ago.

Today, Scottsville is a growing community that has continued to hold onto the smalltown charm. The historic downtown is home to many businesses including the James River Brewery, The Tavern on the James restaurant, a yoga studio, plenty of small eateries and more. There is a Food Lion store so residents can do their grocery shopping close to home. There are soccer fields and playground at Dorrier Park. Scottsville also has a branch of the Jefferson-Madison Regional Library system.

Scottsville is the only incorporated town in Albemarle County. It has its own Town Council and Police Department.